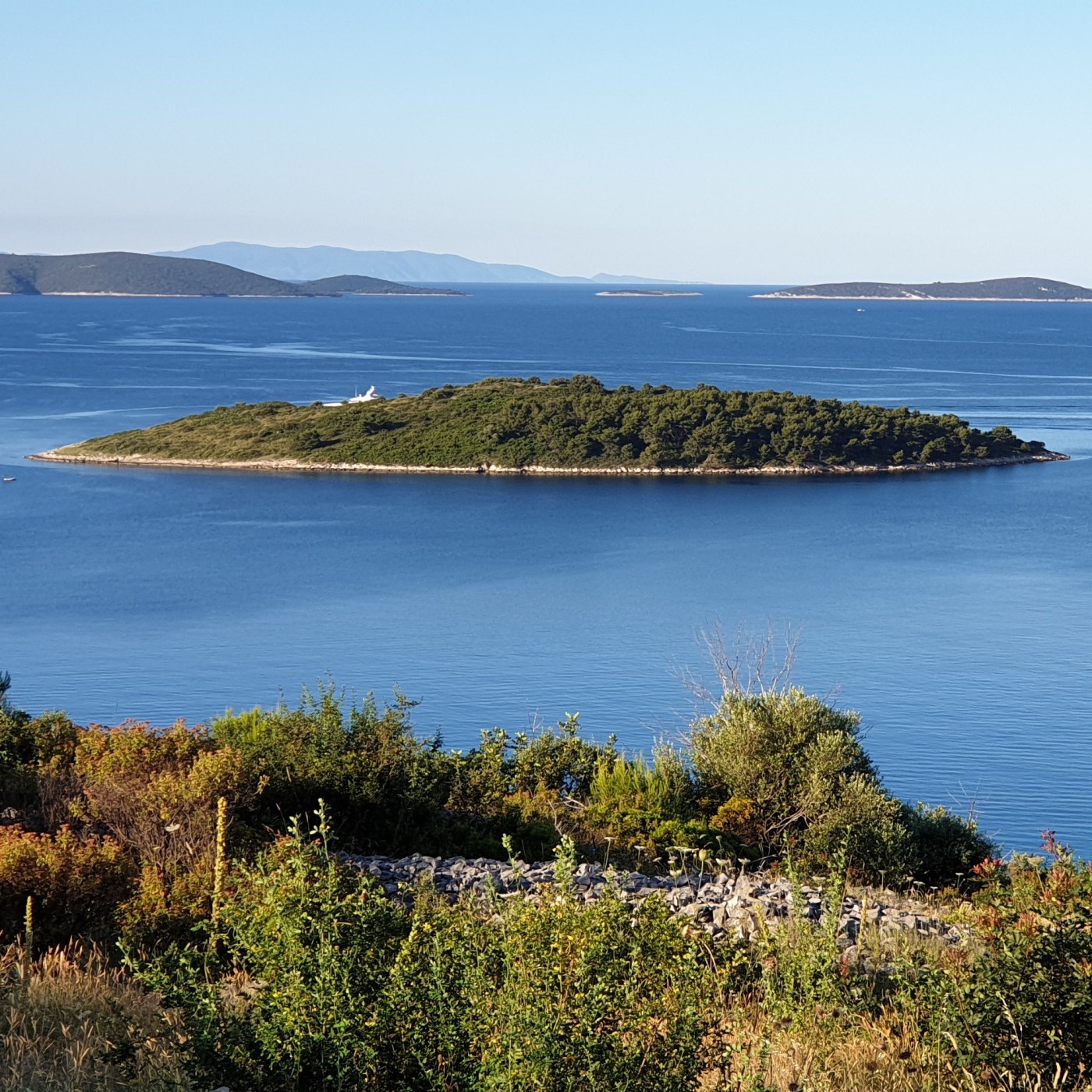 My body is here, but my thoughts are elsewhere.

I’m thinking about the next moment that I’m going to have for myself.

I’m thinking about what I’m going to do with that moment.

I’m thinking about where I’m going to go.

It’s funny because I’m missing this moment to think about some future moment so I can miss that future moment by thinking about another moment even further in the future.

I can’t bring myself into the present. It’s not because it’s too boring. There is plenty going on. But it’s like something’s missing. Something is out of alignment; bent out of shape to conform to a fake narrative. It just isn’t the way I want it to be. True, some of it is because I’ve made some bad choices in the past, but that doesn’t really seem like a good enough reason to miss such long periods in the present tense.

As I went out on one of my shorter hikes before 6am (so I can take off my clothes without worrying someone would freak out about it) I came upon a magnificient view of an archipelago. I decided I would try and meditate for a bit. Thoughts came and went. Bugs came and went. And when it all went away all I was left with was the “ra-ta-ta-ta-ta-ta-ta” of a distant demolition machine. I couldn’t get it out of my head so I took in the vista once more and proceeded back home, my shorts in one hand, my smartphone in another.

And then it hit me. An image from my subconscious was of a breeze against my skin bathed in the morning sun. That’s what’s missing. That’s what’s bent out of shape in my daily interactions. The clothes I wear feed my senses the dull seamlessness of white noise all day long. I do not feel the breeze; I do not feel the temperature; I do not feel the occasional brush against the foliage… All I do feel are some dulled versions of these, my clothes providing random interference to crystal clear sensations.

The clothes cut off my body from the world I’m in and turn me into a kind of brain-in-a-vat, doomed to sensing nothing but its own thoughts. And what better thing to think about than the day – in the distant future – when it is reattached to its body; the day when I finally get to ditch this barrier to the communication of my body with the rest of the universe?

And this is why my mind then always wanders to a time and place when I’m by myself. Because nobody cares about the fact that I’m locked up in a house with no doors, and windows so tiny they only offer a view in one direction.

When I told my therapist that nobody cared about me, it came through as whining, or complaining. But it was really a statement of an observed fact as contrasted to what I was repeatedly told throughout my life – by my parents, my family, my neighbors, by teachers, priests, and government officials. They don’t care about me, or anyone else, because they too are wrapped up in a cocoon of their own, absorbed into their own imagination, such as it is. And within that cocoon they imagine their own problems. And like myself they too fantasize about the day they break their cocoon, or regret the opportunities to do so that were given to them in the past.

While this could be interpreted as my projection, the feeling that it is to a large extent true is inescapable when people explode at me after what I believe is a very balanced and thought through argument and shower me with unrelated bullshit and non-problems (issues that get solved if you ignore them, like what people will say if you do something or other).

I consider myself lucky that my cocoon is made of textile (among other things). It is, as such, very easy to remove, allowing me to reach its deeper layers more easily. But when I think about it, much more of my cocoon is made out of stuff. Actual physical things that slowly turn into a barrier between me and the issues I should be dealing with. I hide behind these things from problems I would rather avoid, or feel too exhausted to tackle at the moment. And the funny thing is – I make myself exhausted as I use these things. Staring at the screen of a smartphone and scrolling through a Facebook feed is not relaxing! Watching an episode of Star Trek until (and sometimes past) midnight is not going to make me feel rested in the morning!

This is why I have started to gravitate towards minimalism; towards removing the clutter from my life: from my surroundings, from my schedule, from my conscious, and subconscious mind. But I find that it is a rather arduous task. I’ll remove some thing, then realize that I need it anyway. Or, I won’t remove some thing, then realize I haven’t used it in months. With subconscious it’s the direct opposite: I decide to remove something but I find it creeping back and taking hold again; or I decide to acquire something, but I find it fading away, like the sensation of an object I’ve caught in my hand in a dream just a moment prior to waking up. I have a bag full of junk in my study waiting for me to see if there’s ever going to be anything I need from it. Some of it used to be in a cluttered drawer where I just put it and forgot about it.

There are other things I have that I just keep pulling around with me like dead weight. Other things I’m divided about. I have a smartphone that is both useful and distracting. I downloaded an app called Thrive which was supposed to help me to not get distracted, which then proceeded to distract me from moments when I thrived without it, by sending me notifications about not having been used for a couple of days. I deleted it, deciding that the decision to use my phone, or not use it, is my own responsibility and not the responsibility of some stupid app. Instead, I stopped carrying my phone around with me all the time. Any calls and messages can wait until such moment when I have attention to spare – yes, even the urgent ones.

But here’s the issue with minimalism: among other things it means eliminating duplicity in one’s life. That is, it means not behaving one way when you’re alone, another way when you’re with your relatives, and still another way when you’re with your friends, and/or neighbors. It means staying true to yourself no matter the situation, or the people that surround you. It means not wrapping yourself up in a cocoon, hiding who you truly are, getting lost in thought or rumination, when you’re around others. So, since my cocoon is made of textile, that would mean I should just be naked around others. It’s an inevitable, obvious, and quite simple conclusion. And in an ideal world, it would be just as simple to follow.

But the world is not ideal. People get offended by other people’s nudity. They will refuse to deal with individuals who prefer to be naked, because in their minds they’ll link nudity to all kinds of obscenities, and will even go as far as to argue that nudity can cause emotional trauma to those who witness it. Furthermore (or consequently), in my country you can be fined for nudity – even nudity in secluded spaces, away from the sight of the public (scaled to paychecks in more developed countries, a fine would amount to $800 and more for a single offense).

So our society forces some kind of duplicity in our lives and in fact I have yet to meet a person who, in the words of Ralph Waldo Emerson, “… in the midst of the crowd keeps with perfect sweetness the independence of solitude.”

The goal, for me, therefore, cannot be to eliminate all duplicity in the name of pure minimalism and who cares about everything. It is to be conscious of those aspects of myself that I cannot fully expose “in the crowd” while at the same time working towards making it possible. All the while, however, I need to be aware of the fact that there are behaviors which I like to engage in (or, better said, indulge) which aren’t sustainable. “Binging” on Netflix, or sweets are two such examples. While these behaviors might be very appealing, they cause more trouble, and they create more clutter (by, for example, stalling the cleaning of existing clutter) in the long run, while also promoting duplicity (or how else do you explain to your boss why you haven’t finished a project on time when the real reason is that you binged on the new season of Stranger Things?).

If I forget about nudism, I suppose that would be another way for me to eliminate that duplicity in my life. But I’m not prepared to sacrifice that aspect of me, because I don’t see how it is an obstacle to anything. In fact, it frees up much of my time because I don’t have to do so much laundry. And to preserve other people’s delicate feelings (and, apparently, eyeballs), putting on clothes is not as much of a bother. Besides, one of the things I know about myself is that I don’t like to conform – at least not completely, and not permanently. In fact, it is this pressure to conform which has resulted in as much duplicity as I note in my life.

Being naked is, for me, more than just a lifestyle. While I have found some things in the memories of my childhood which resulted in me becoming a nudist, I feel the roots of it go much deeper, down to my very nature as a human being. I will never be able to cover myself up, hide my humanity from sight, and be fully present in the moment. It is the same as asking of me to hide who I am, to hide my curiosity, my stubbornness, my adventurous spirit… and expecting me to be relaxed and present.

It’s not a realistic expectation.

I can’t hide myself and stay in sight, both at once.

I can’t be in two places at the same time.